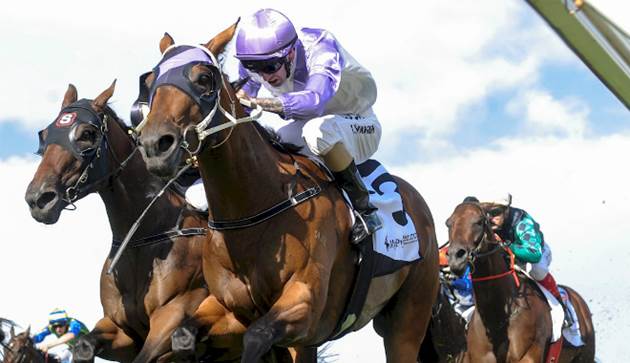 A year after delivering Mornington horseman Michael Mehegan his maiden Stakes win as a trainer, homebred sprinter Prussian Vixen staged another Caulfield boilover when she defended her Bellmaine Stakes (1200m) crown on Saturday.
Despite being sent around at 40-1 by punters, Mehegan said he was confident the five-year-old would acquit herself well first-up on the strength of her recent trackwork and trials, the latest of which came alongside Group 1 winner Shoals.
After watching Prussian Vixen stave off placegetters Flippant and Petition, the trainer is now eyeing another crack at his home track feature, the Listed Hareeba Stakes (1200m) at Mornington, in which the daughter of King of Prussia ran a narrow second to Bassett last year.
“We were pretty confident coming here today even though her form has been horrendous,” Mehegan said.
“We tipped her out for a spell, brought her back and she’s done everything right, her trials have been good and we had no reason to doubt her.
“We’ll definitely go to the Hareeba (Stakes) now and we’ll evaluate it from there.”
To read this article in full click here
To watch her race click here
Tweets by MJM_Racing