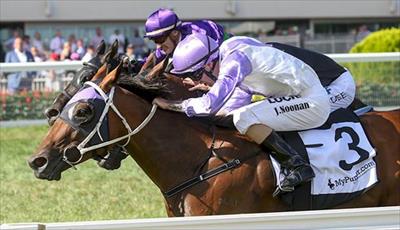 Michael Mehegan is proud of his perfect record in Group races, but he also knows it will not last forever.
The Mornington trainer, who prepares a small team of six out of rented boxes at Tony Noonan’s stable, has saddled runners in two Group races and he has won them both.
Prussian Vixen, the horse who has provided Mehegan with those two wins, will put that strike-rate to the test when she contests Saturday’s $500,000 Group 1 Oakleigh Plate (1100m) at Caulfield.
Tackling the Melbourne Racing Club’s premier sprint race was not always Mehegan’s plan, but he was happy to give Prussian Vixen her chance after she completed back-to-back wins in the G3 Bellmaine Stakes earlier this month.
“With her rating now, it makes it a bit difficult where to go with her,” he said.
“We were going to go to the Hareeba Stakes, but that would have been six weeks from her last run then probably on to the Sangster, so there are not a lot of options with her at the moment.
“She has to race somewhere and I think it’s worth a shot. She’s really well in herself and if she’s going to run well in a race like the Oakleigh Plate, this is the time to do it.
“At the same time, I know she has to go to a new level. Whether she can do that, we’ll find out on Saturday.”
It would not be the first time Prussian Vixen has caused an upset if she does win on Saturday. The King Of Prussia mare’s win in last year’s Bellmaine came as a $12 chance, while she caused an even bigger boilover on February 10 when successful at $41.
That was her first start since last year’s Alinghi Stakes, in which she ran second-last – a finishing spot she occupied in all three of her runs last spring.
It confirmed that the five-year-old saves her best for summer, which, in a way, was a relief to Mehegan.
“We spent a lot of time and a lot of money trying to find out what was the reason for her poor form last spring and the vets couldn’t find anything other than putting it down to purely that time of year,” he said.
“A lot of mares under-perform whether its spring or autumn, depending on what they like, but she just won’t perform at all in spring.
“It’s either she puts in 100 per cent or she puts in nothing. Her heart rate after the races (last spring) was showing that she wasn’t having a go.
“I guess on that form she could have quite easily ended up being retired, but we didn’t so she’s come back this prep and she’s given us no reason to doubt us.”
Prussian Vixen drew barrier 13 in the Oakleigh Plate, which will become gate 11 if the emergencies don’t get a run, and will be partnered by Dean Yendall with regular jockey Jake Noonan unable to make the weight of 53.5kg.
“I would have been happy anywhere midfield – she’ll come into 11 if the emergencies come out – a lot of the other horses that have got speed have drawn out as well, so I guess there’s going to be luck in running there,” he said.
“We’ll probably just ride her as we normally do. She probably won’t lead you wouldn’t imagine, but she should be in the first five and hopefully we can get on the back of something that can take us into the straight.
“She normally races well on a fast tempo. That’s just her, she loves it.”
Satisfied with the draw and knowing that Prussian Vixen is in a better frame of mind than her previous campaign, Mehegan is confident she will acquit herself well.
Normally, that has him at ease on raceday, but he suspects it might be a different story this weekend.
“I’m tipping I’m might get a little bit nervous,” said Mehegan, who has been training since 2006.
“When we were having trouble with her, I was nervous every start. But in the Bellmaine two weeks ago I was pretty composed I think.
“We’ll see if it’s a different story in a Group 1 on Saturday.”
Tweets by MJM_Racing