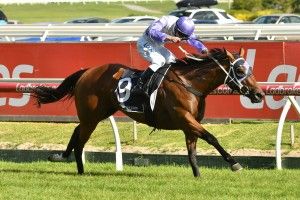 Prussian Vixen isn’t talked about as one of the better mares running in Victoria, but the Michael Mehegan-trained runner should be taken note of ahead of Saturday’s Listed Hareeba Stakes.
The locally-trained four-year-old at Mornington will get the advantage of her home track where she has won two from three attempts and she’s coming off an impressive last start win at Caulfield.
The talented mare defeated the likes of subsequent winners Silent Sedition and Ameristralia in the Group 3 Bellmaine Stakes, but there’s a reluctance to talk about Prussian Vixen as a leading contender despite strong form this campaign.
“I think she’s definitely underrated,” Mehegan said. “She has always flown under the radar, even when she wins they’re always keen to talk about the horses that she beats rather than her.
“She’s been competitive and beaten home some quality horses.”
She has trained on well since winning the Bellmaine Stakes in February and bigger races could be on the cards if she performs to a high standard on Saturday.
“She came through the Bellmaine terrific – there just wasn’t a lot for her,” Mehegan said. “I had her in the paddock for seven days immediately after that win.
“She had a trial 10 days ago, she won that, she went super so she’s coming into the Hareeba well.
“I’m really happy with how she’s been training and I’m hoping she runs well.”
To read the article in full click here
Tweets by MJM_Racing