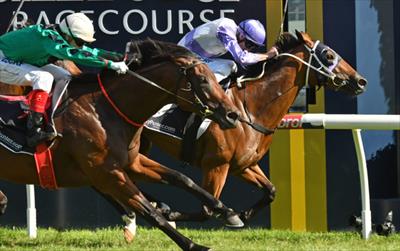 Mornington trainer Michael Mehegan has landed a stakes winner with his first runner in a black-type race.
Prussian Vixen led throughout in the Group Three Bellmaine Stakes (1200m) at Caulfield on Saturday to give the former horse breaker his biggest success.
Ridden by Jake Noonan, Prussian Vixen ($12) held on by a half-head to defeat the $3 favourite Silent Sedition with Ameristralia ($5.50) a half-length away third.
Mehegan was noticeably calm as he waited for Prussian Vixen to return to the winners’ enclosure.
“I thought I’d be more nervous today that what I was,” Mehegan said.
Victory on Saturday was Prussian Vixen’s sixth from 21 starts and pushed her prize money towards $300,000.
To read more of this story click here
Click to view her race
Tweets by MJM_Racing